Paul Geary is responsible for laying down the low frequencies of Nik Kershaw’s band. In 1993, he was voted Best “New Musician” by the British Music Association and has since established himself as one of the UK’s foremost studio bassists and active session musician.

Paul started his playing career comparatively late, having had no formal music training. He started playing bass in a gospel church at the age of 18 and shortly after this he went on to study music in the US and is now an Honors Graduate of Berklee College of Music in Boston USA, and B.I.T, Musicians Institute of Technology in Los Angeles, California. He received his first break in 1991, working with soul diva Lisa Stansfield and Gabrielle. Shortly after this, he went on to work with Chris Rea and played alongside Jools Holland as part of the Princes Trust Rock School. Later in the autumn of 1993, he started playing bass for Chris Norman, the former lead singer of Smokie. 1994 brought relocation to London to head up to the Academy of Contemporary Music’s bass school. Paul still found time in his busy schedule of full time courses at the Academy to lecture live performance workshops and he is also a contributor for Guitar Techniques & Bass Guitar Magazine. 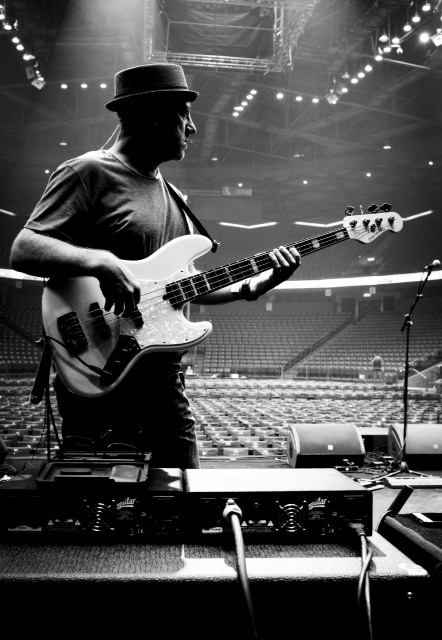 Paul Geary has been playing, gigging and teaching bass for many years and has had the opportunity to play loads of different bass guitars.

In 2010, Paul was really excited when Chris May from Overwater Basses offered to build Paul a one-off custom bass. This bass was the start of a fantastic relationship and endorsement of Overwater Guitars.

Which model Overwater bass do you play?

Why do you choose to play Overwater basses?

I play Overwater quite simply because they never let me down, or fail to deliver, both on stage or in the studio. Totally reliable and made to measure. Also, Chris May is a really nice bloke!

How long have you owned an Overwater bass?

I have been part of the Overwater family since 2010 when Chris made me my first Perception bass.

Get in touch with Paul Geary 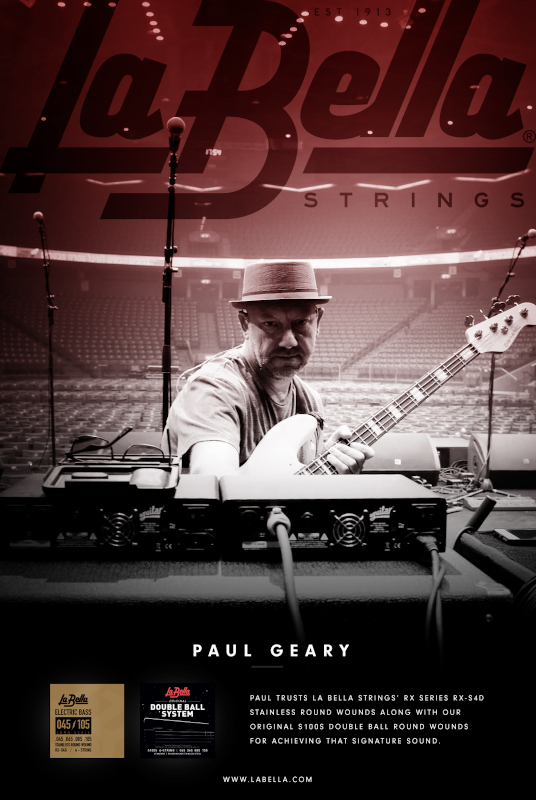 Not all constructions are created equal. Every string in the Rx Series is uniquely constructed for that particular set. This “Focused Set Design” concept helps achieve all the elements of a perfectly balanced set such as tone, feel, vibrato, and tension. More flexible and lighter in tension compared to our SN & M Series, players will find the RX Series are more comfortable to play on any style bass. The RX Series is just the remedy your bass has been calling for! 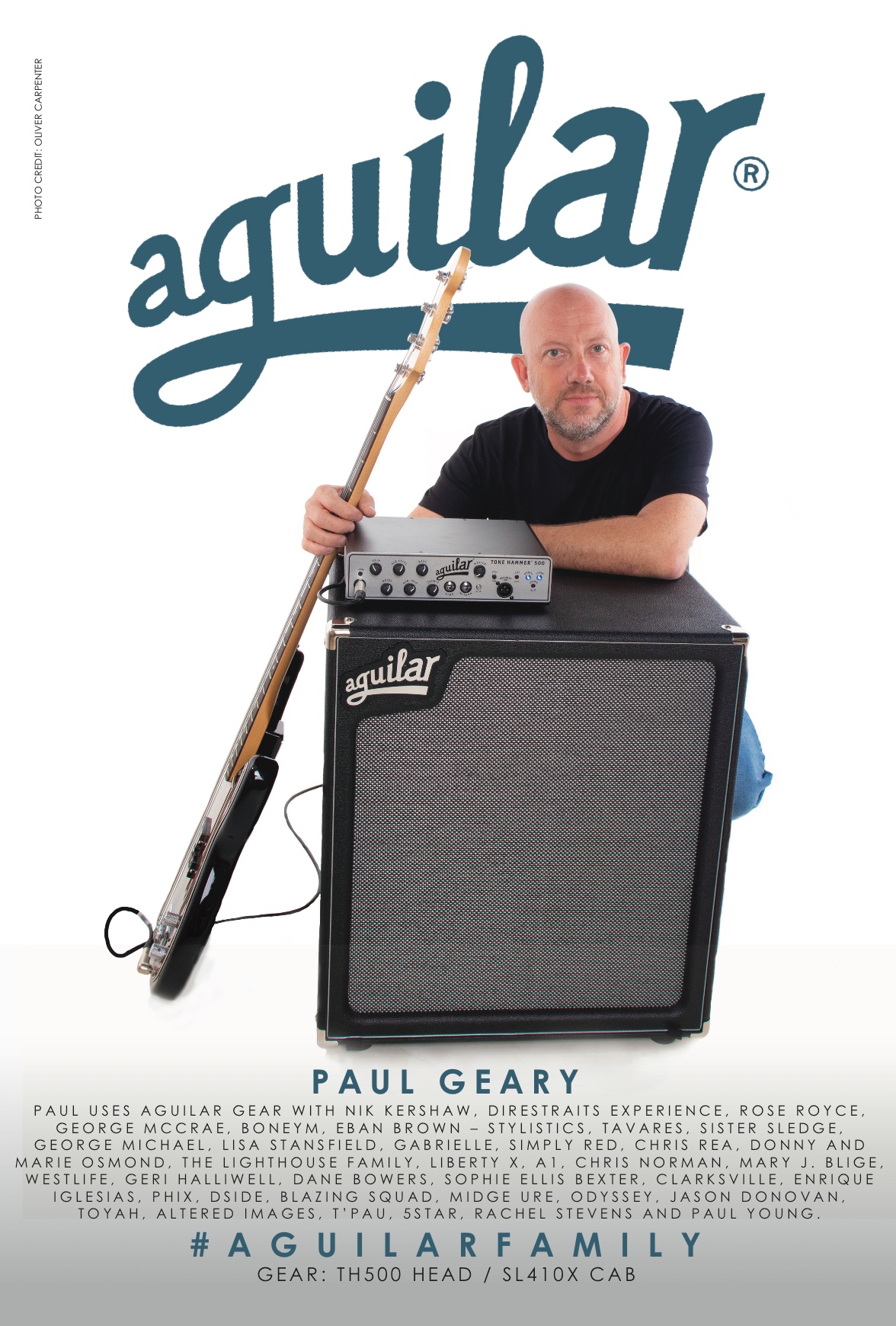 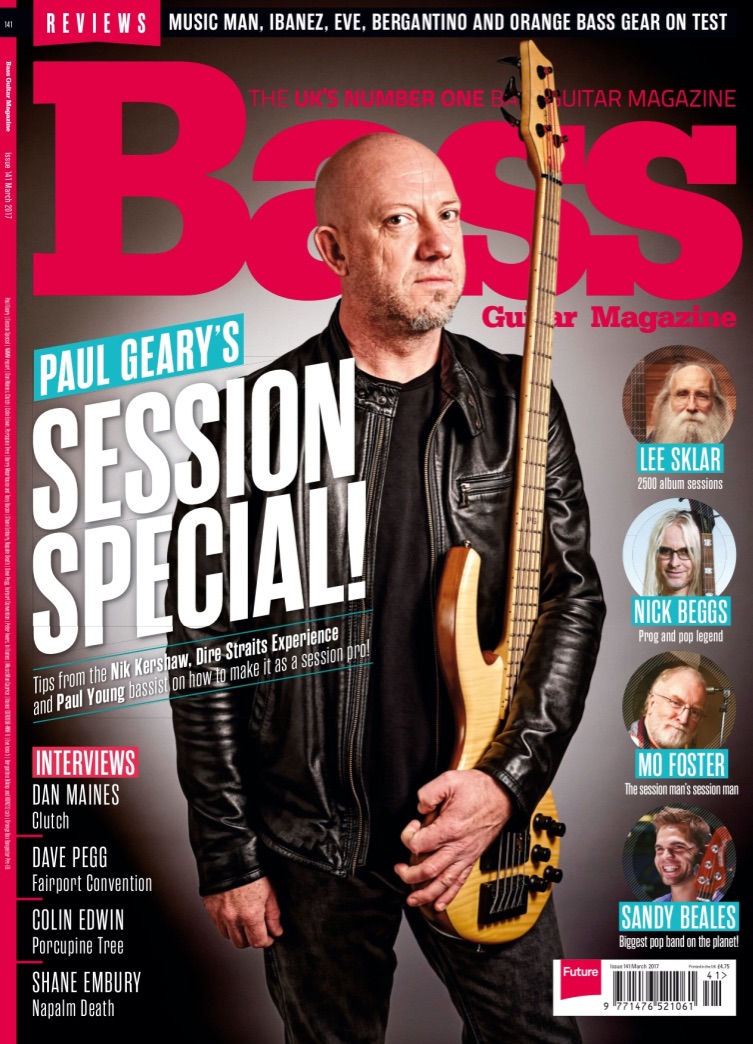 Paul has been a longterm supporter of Bass Guitar Magazine and continues to write articles about Playing and Practising Techniques, Understanding how to approach Styles of Music and Musical Interpretations and How to develop and  grow your musical Career!

He certainly racks up the touring miles, and 2018 has been a standout year for the bassman so far, with tours and festivals across the UK and Europe.

Somehow, all of this falls into place alongside his teaching commitments at ACM in Guildford and his private tuition courses, so when the opportunity arose to follow Mr Geary for a day at a London show with the Dire Straits Experience, we were quick to take up the offer 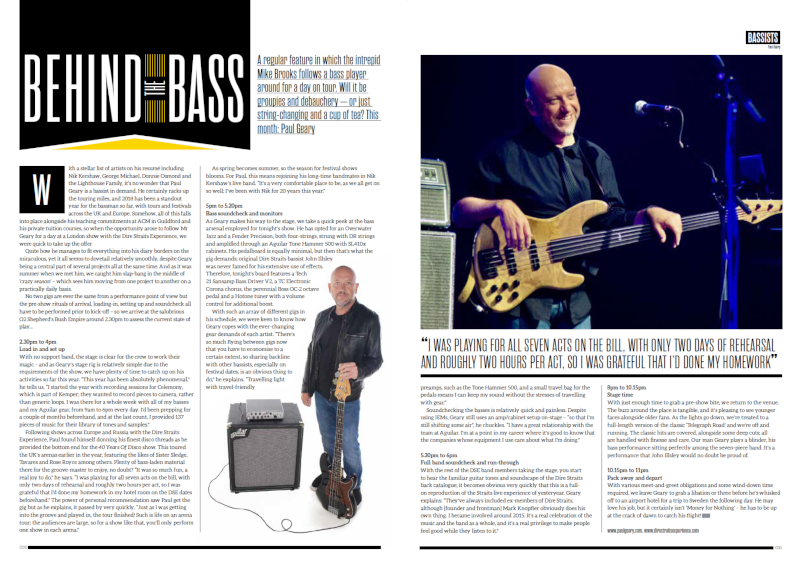 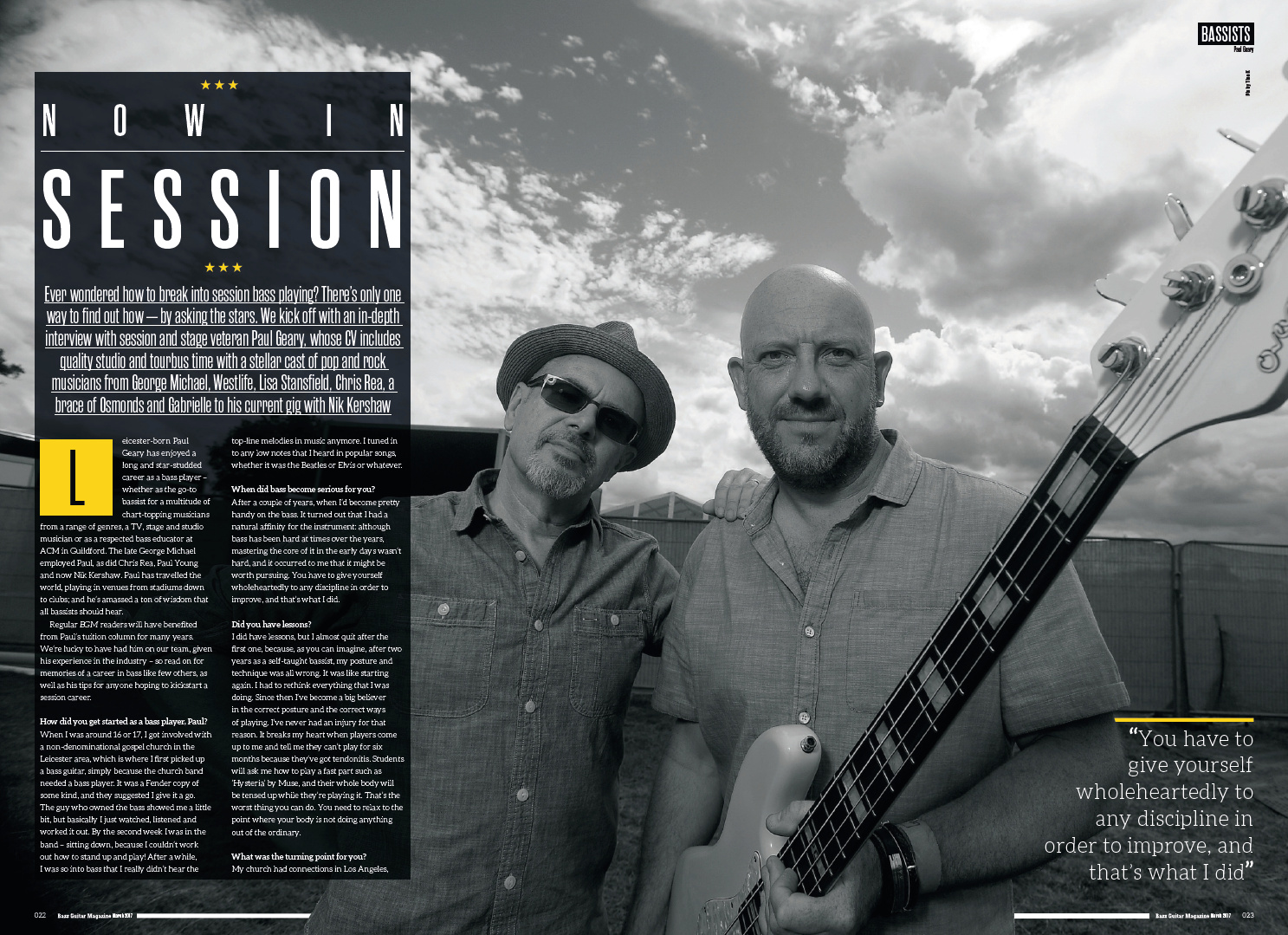 Ever wondered how to break into session bass playing? There’s only one way to find out how – by asking the stars.

We kick off with an in-depth interview with session and stage veteran Paul Geary, whose CV includes quality studio and tour bus time with a stellar cast of pop and rock musicians from George Michael, Westlife, Lisa Stansfield, Chris Rea, a brace of Osmonds and Gabrielle to his current gig with Nik Kershaw.

Paul is now playing a Sandberg Californian V Series Bass. This is a very special instrument and has a clarity and precision that makes the difference!

You can check-out the specs. on the Sandberg Basses here –

Longtime BGM columnist and session veteran Paul Geary has new endorsements with Aguilar Amplification and Tech21 to add to his relationship with Overwater and DR Handmade Strings. He’s currently working with Nik Kershaw and the Dire Straits Experience and laying his bass tones down through an Aguilar TH500 head and SL410 cabinet on tour.

As you’ll recall from his cover feature in BGM141, Paul is an honours graduate of the Berklee College of Music and the BIT Musicians’ Institiute of Technology and got his initial break from working with Lisa Stansfield and Gabrielle in the early 1990s.

He has gone on to play with artists including Paul Young, The Dire Straits Experience, George Michael, the Lighthouse Family and Chris Rea and went on to head the Bass School at the Academy of Contemporary Music, London in 1994.

As he tells us, “I’m honoured to be part of the Aguilar family – I’m touring most parts of the globe at the moment with my Tone Hammer 500 head and SL410 cabs. Night after night, they never fail to deliver! I’m also using the new Tech21 Bass Fly Rig. Having used a Sansamp for many years both on the road and in the studio, this is a great addition to my pedalboard with everything I need. It’s tiny – but as we all know it’s not the size that matters, it’s what you do with it!” 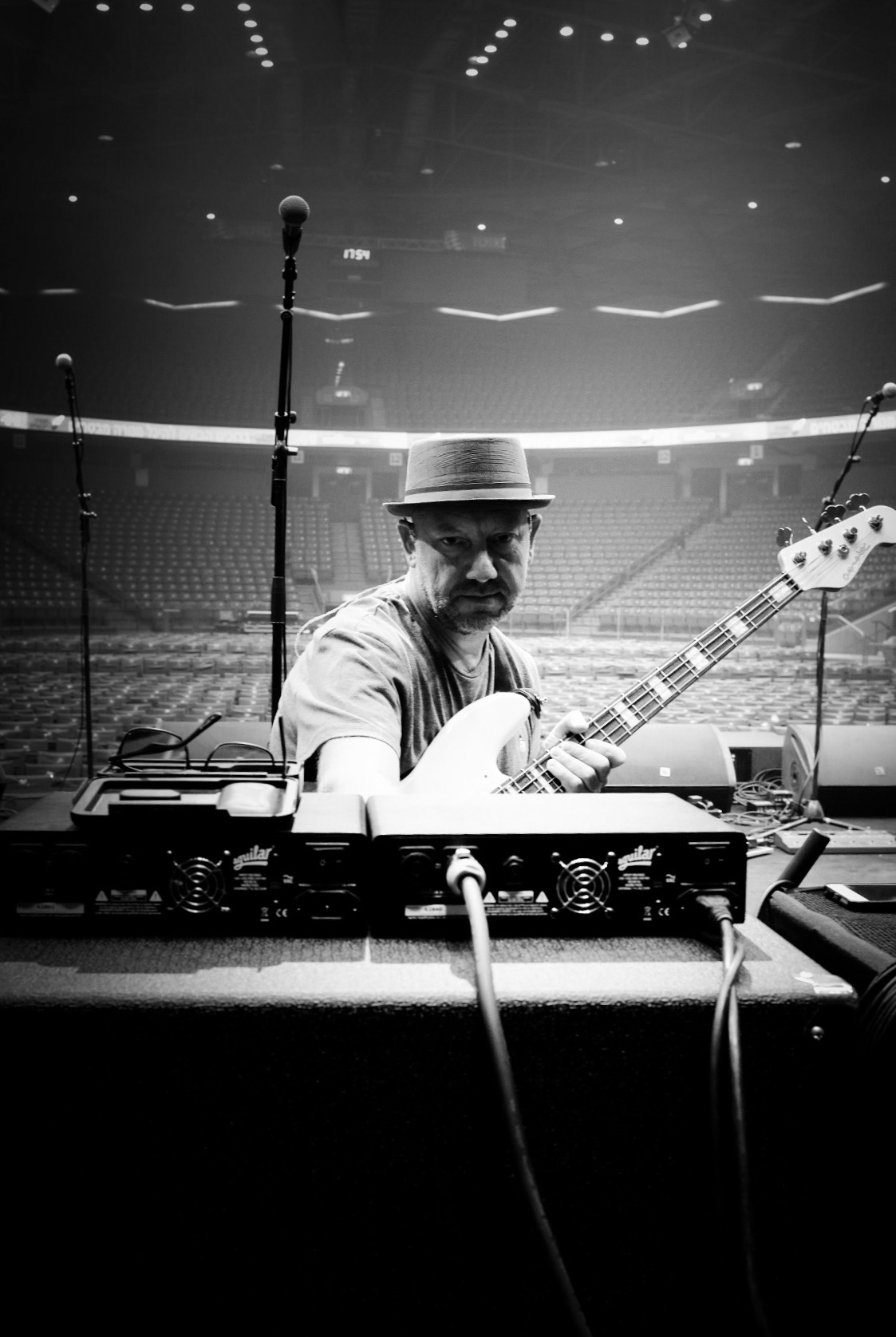